I know it has been awhile. I have taken a bit of a sabbatical I suppose. It is pretty hard to top the last post that Denise wrote. So now I am back to more mundane shaking-it-up topics. What have I done since I last posted? A couple of weeks ago I decided to go an entire week with not wearing a fleece vest to work. It was actually really difficult. My favorite outfit is still an Eddie Bauer waffle shirt (Henley) and a fleece vest. It is the quintessential middle aged Wisconsin woman look. And now I really know why. It just doesn’t get any more comfortable than that. Comfortable and cozy. I did make it through the whole week, but it was pretty tough. 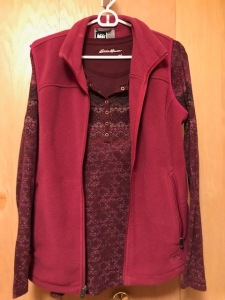 I also got my hair cut a couple of weeks ago. All of the non-gray hair is officially gone. I wanted to schedule that haircut on a Thursday, but unfortunately that could not be arranged. So that happened on a Tuesday instead. 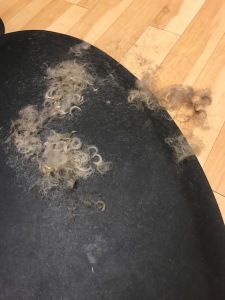 This is the last of the non-gray hair.

And this week? I actually did something very different from my routine today. I totally shifted around my early morning routine. Generally I go exercise first thing in the morning, get cleaned up, stop at the grocery store for my salad, and then go to work. The catch was that today I played accordion at work. It is was way too cold to leave the accordion in the car while exercising, and I didn’t really want to bring it inside and leave it at a desk somewhere. So instead I exercised, came home to get cleaned up, grabbed food from the fridge instead of going to the grocery store, and then went to work — with my accordion. And I still got to work on time!

And what else did I do this Thursday for Shake It Up Thursday?  I wrote this blog!!